2017 Trusting News Project: What we learned

DESCRIPTION: Encourage conversation and interaction. Listen and respond. Invite people to get to know you. Participate in a way that feels natural to the user. Admit what you don’t know. Be human. METRICS: Strategies in this category were assessed by the user response, both quantitatively (how many) and qualitatively (how valuable). 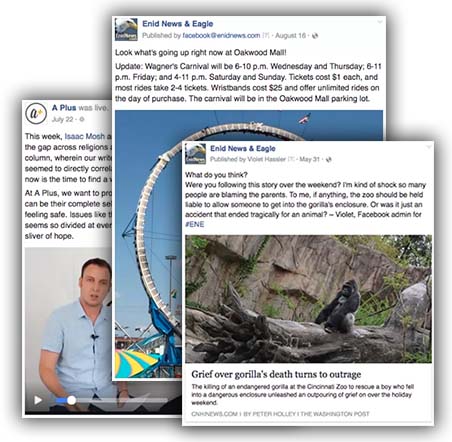 Some of the newsrooms working on this project had a goal of creating engagement. Others had already worked hard to cultivate engaged audiences and were ready to move to jedi-level strategies.

Fresno, Enid and Ogden, for example, really took their already engaged audiences out for a test drive to see what they could do. Take a stroll through examples of hosting conversation from Fresno and Ogden, and watch how they masterfully offered opportunities for conversation that their audiences were eager to take them up on.

St. Louis Magazine did a timelapse of proofs of the print magazine being put up on the wall.
Fort Worth invited questions about past crimes, then answered them.

KLRU hosted a town hall event to identify common ground and work toward a kinder, more open minded community. The station live streamed it on Facebook and got a huge response in terms of reactions, comments and shares. That helped spur the creation of a Facebook group with 1,100+ members, focused on continuing the conversations started at the event. There’s even a spinoff book club that bubbled up from conversations in the group.

Would your newsroom be brave enough to ask “What does #BlackLivesMatter mean to you?” The Standard-Examiner hosted in-person conversations in the newsroom and published a series of videos. The resulting online conversations were mostly productive and civil, due in large part to a history of productive discussion on the page. And when users shared the videos, oftentimes they started a conversation with their network or praised the concept of the project.  It was particularly great to see that when a commenter was confused about why a police officer in the video didn’t weigh in on an issue, the reporter who worked on the series took the time to clarify, and his comment got positive feedback as well.

As you look through these posts, think about the mindset needed to produce them. These journalists continually considered typical user behavior and learned to think about what they hoped would happen as a result of the each post.

The success of conversations varied quite a bit by newsroom. To some degree, newsrooms have to work their way up a ladder of difficulty when it comes to conversation prompts. As users get more accustomed to interacting with a page, the page can offer prompts that have a higher degree of difficulty. But if a page without much history of engagement throws out a question about taxes, they’re unlikely to get much in return.

A sweet spot seems to be asking a question that people feel compelled to answer because of strong emotions. Ask about something like the worst traffic in your area — a question that taps into people’s own experiences and opinions and also into their outrage.

Don’t start by asking something that takes a lot of thought (like opinions on a tax increase) or that asks people to open up personally (like how they feel about their fathers). Work your way up to those kinds of questions.

Ogden has a well-trained audience. They can get people to talk about property taxes or starting a business, And when they ask about a controversial gun issue, they get thoughtful responses, not just people yelling at each other. That’s because they’ve earned it. They join conversations, validate participation and show that they understand what their community wants to talk about. (Even they can’t get people excited about what’s important when electing a commissioner, though. That’s the kind of question journalists wish people wanted to answer, but few people really do.)

Enid has a similar situation. They’ve earned the conversations they host through careful tending and by knowing their community so well. Whether they’re inviting conversation about Pokemon Go, wind farms, or a harassed restaurant server, their users tend to play along.

As the Sarasota Herald-Tribune works to build engagement, however, users are not well enough primed to jump in on a complex question of beach renourishment.

WCPO, as a commercial TV newsroom, had a large audience that engaged more easily than some others. Users tended to respond to more general questions than other newsrooms would succeed with. The journalists there got away with prompting conversation by attaching a simple “what do you think” to a provocative headline.

People felt a connection to the WCPO brand and sometimes were quite willing to share their personal lives with the station.

Newsy, the newsroom partner with the biggest audience, also had one of the lower engagement rates. They experimented across a variety of topics. Here are some successful posts:

In general, the newsrooms looked for ways to go beyond announcing the news and instead anticipated what users would want to do in response. They looked for opportunities to gather perspectives and respond. Here are successful examples, organized by topic.

Some newsrooms experimented with having journalists stay engaged in comments or sharing about their own lives. Here are some examples of times the willingness to engage led to positive user response and meaningful interactions.

For some journalists, experimenting with sharing their process meant going live. Live video was

What didn’t work as well?

Broad questions often flop. You don’t want users to have to think hard to understand what you’re looking for. Instead, you want them to have a response pop into their head as soon as they see a prompt.

It’s easy for questions to feel rhetorical, too. If your goal is a response, lead into the question in a way that makes it clear you’re not just throwing it out for people to think about. Adding a “do you think” to the beginning of this one would help.

Asking for questions for reporters had really mixed success. It didn’t work well when WCPO was interviewing a high school football coach, or when Newsy was sending reporters to Ferguson. When trying this variety of crowdsourcing, be sure you pick a topic your audience has a lot of curiosity about. That doesn’t just mean something they’re interested in. It means something about which questions come quickly to mind.

Inviting Facebook users to take actions in other places is hard to track the success of, since the desired actions wouldn’t necessarily appear on the post. In general, little Facebook activity resulted when newsrooms tried to send users from Facebook to Snapchat. They had better luck, though, when a post both gave them something to respond to on Facebook AND offered them a Snapchat tease as well. Other newsrooms also tried driving traffic to other platforms, without a noticeable bump in engagement or follows on those platforms.

Also tricky is asking people to be creative or witty. It takes a lot of thought for most users to participate in something like a caption contest, so be sure you have just the right topic before offering this up.

Tips on writing styles and framing

Length of posts: When prompting conversation, some newsrooms felt the need to use a lot of words to set the stage. St. Louis Magazine sometimes got way too long and other times could have used an edit of perhaps 30 percent of the words.

Kansas City too often used the first sentence of a post to basically state what was in the headline (here, here and here). Schools Week, on the other hand, had a knack for picking the right few words to use as a provocative prompt and let the link preview do the heavy lifting of the story topic (here, here and here).

In general, if a post looks like a lot of work, users are likely to keep on scrolling or swiping. Be as brief as you can.

Be specific with prompts: Try to go beyond adding “what do you think?” to a post. Try what comes to mind, Or what would this mean for you. And if you ask what do you think, be sure what you’re looking for is general reflections.

Include emotion: Journalists often get nervous when asked to add emotion or opinion to a post. But doing so does not always run counter to journalistic mission. It likely would not be at all controversial to congratulate schools officials for keeping kids safe or say that your staff is saddened by the death of a child.

Who’s the post for? Try leading off with the most interesting part of a post. That often means NOT kicking it off by talking about yourselves and what you want. Instead, start with a provocative question.

Choose user-focused language: Your readers don’t go around talking about “story ideas.”  Instead, try asking people what’s going on in their lives or what they wish people knew more about.

Identify why users might care: This might seem obvious, but too often a post leaves out the angle that will invite an emotional response. This Fresno story is about supporting teachers and fixing schools, but the text of the post and link preview just talk about a bond. If you make users work to find the interesting part, you’ll lose them.

Enable action: Think about what people might want to do in response to hard or sad news, and include information that helps them act. Newsy’s framing on this Aleppo post is very human.

What happens when people talk back to you?

When you have a goal of hosting conversation and promoting genuine engagement, there’s no good excuse for being absent. If you throw a ball, you need to be ready to catch it. If you have a huge audience, of course you can’t respond personally to each comment. But you absolutely can demonstrate that you’re present and listening. More on that is on the Key Findings page.

Try it in your newsroom

Use this worksheet to engage your newsroom in a conversation about how to improve your relationship with your readers by engaging authentically.